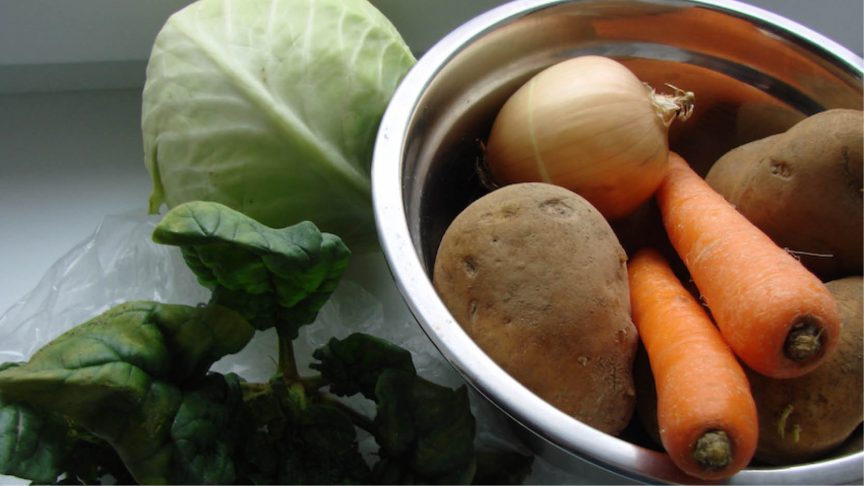 Vegan, kaimanga, kapa kaiota, whekana – whatever you call it, a movement towards a harm free, plant-based lifestyle is being championed by Māori looking to protect Papatūānuku.

Across Aotearoa, people are ditching dairy and moving away from meat in an effort to live healthier and more sustainable lives. Plant-based diets are becoming more popular, and although vegetarianism and veganism are still widely viewed as ‘white people things’, in many instances it is Māori who are advocating for the lifestyle. Earlier this year, it was reported that Tūrangawaewae, home of the Kiingitanga and our country’s largest marae, was introducing vegan meals for its people’s health. And in June, many got involved in Pipiri ki a Papatūānuku, making positive changes for the good of the land. Underpinning these movements is a desire to do the right thing for the land and for the people.

Raniera Rewiri (Te Whakatōhea, Tūhoe), who calls himself the Plant-Based Māori, is perhaps the most public face of Māori veganism. He was initially inspired by a friend to give vegetarianism a try, which he did for a month. His mate was vegan ‘for the animals’, but it was veganism’s benefits for the environment that ultimately persuaded Raniera. He says that these days, more Māori are embracing veganism, even if not everyone is ready to make the change. Initiatives like Pipiri ki a Papatūānuku, and Tupuānuku – his vegan catering business – are encouraging people to be more mindful about the choices they are making around food. “These kaupapa all have one thing in common, that is, they support the health and wellness of our people and whenua.” This, he says, represents an important shift for Māori.

Anna Te Rei (Ngāti Rangi, Ngāti Porou) is one of those who is making the change. She is transitioning to a vegan diet – one that doesn’t include any animal products. Currently, she says, her diet is best described as ‘pescatarian’. She and her whānau eat fish and other kaimoana, a lot of vegetables, and no dairy or eggs (but she’ll eat them if someone gives her a dish containing them). Some of her whānau and friends “still look at me sideways” she says – but she sees her lifestyle as natural, because historically, Māori diets were plant-based. Ultimately, however, her reasons are ethical: “I’m happy to be a part of the growing number of compassionate people who are putting animals first before their desire to eat them.”

For many Māori, what we eat is merely one part of a broader ethical commitment. Laura O’Connell Rapira (Te Ātiawa, Ngāpuhi, Te Rarawa, Ngāti Whakaue) has been vegan for four years. Like many vegans, she has three main reasons for this: the animals, the environment, and her health. For her, though, being Māori is integral to her veganism, and this gives it an added dimension. “In the Māori worldview,” she says, “the rivers, lakes, and forests are our ancestors. They are part of us and we are part of them. But right now, our rivers and forests are sick, and intensive animal agriculture, and especially dairy in New Zealand, have played a huge role in that. By not eating meat and dairy, I don’t contribute as much to the sickness of my ancestors.” She points out that the confiscation of Māori land has been used to support the proliferation of dairy farms throughout the country. “I consider not buying into the dairy industry to be an act of decolonisation,” she says.

Laura rejects the idea that veganism is a Pākehā thing. “I think people of colour are under-represented in the stories we tell about veganism and plant-based diets, for sure. Veganism is definitely not a ‘white’ thing. If you travel to Asia, loads of the food is vegan or vegetarian. A huge percentage of the world lives on beans and rice. Hindu, Buddhist and Rastafarian religions, whose roots are in India and Jamaica respectively, encourage cruelty-free and plant-based eating lifestyles and have done forever. I think what white folk have probably done is capitalise on, and commercialise, veganism in much the same way they have with yoga and other cultural and spiritual practises.”

Earlier this year, Waimirirangi Koopu-Stone (Ngātiwai, Tainui, Te Whānau-ā-Apanui, Te Arawa) founded Pipiri ki a Papatūānuku, which challenged people to give up ‘bad’ habits for the month of June. Her aim was to raise awareness about the effects that our everyday decisions have on Mother Earth. Anyone could sign up, choose an action – going meat free, for example, or saying ‘no’ to single-use plastics – and commit to it for one month. I chose ‘recycle’, making an effort that month to learn about what can and cannot be recycled.

Waimirirangi and her partner Tamoko Ormsby (Ngāti Maniapoto, Ngāi Te Rangi) have been transitioning toward a tūkino-free lifestyle – one which avoids harm – for two years now, an approach which is underpinned by whakapapa and pepeha. “The ultimate ‘diet’ we are working toward is being tūkino-free,” she says. “Eating and sourcing kai that has little to no impact on our whenua and wai, and, ideally, growing our own māra.”

I asked her what prompted this change. “He Māori ahau i mua i ahau e tangata ana,” she told me. “I am Māori before I am a human being. The first thing I acknowledge when I introduce myself are the mountains and sacred waterways in which I descend. I draw strength from my many waterways: my awa, Waikato; my moana, Mokau; and I source energy from my many maunga. These elements make up my tuakiri as a young Māori woman. It’s hypocritical to me to hold these aspects of my being at such high stature, and turn around and consciously make a choice that is harmful to them.” She is not saying that Māori have to do what she did, she explains – after all, she is still learning herself. “But this is my why.”

Waimirirangi avoids terms like ‘vegan’ and ‘vegetarian’. She sees these as Western labels that have been created to make categorisation easier. “As Māori, our ways of living are informed by ancient knowledge and stories, Māori gods and goddesses, rationale, spiritual prompting, and guidance,” she says. For many indigenous peoples, labels are “an eyesore”. This, she tells me, is why she describes her lifestyle as ‘tūkino-free’.

A report released by the UN Intergovernmental Panel on Climate Change in October claims that to keep global temperature rises to under 2C by 2050, beef consumption needs to fall by 90% and be replaced by five times more beans and pulses.

How we talk about this could be what encourages – or discourages – people from making a change.

I asked Waimirirangi how her whānau and friends reacted when she started to change her lifestyle. “Like most Māori whānau brought up on boil up, hāngī, and the other marae hākari goodness would… they were confused. We always try to speak to the ‘why’ instead of the ‘what’.

“We’re not vegan, we’re doing what we can to protect our pepeha by dropping lil bits of insight like, ‘Nana, you know how we kick up a stink about the farming chemicals in our awa? I think that steak is from one of the cows on that farm….’ instead of being ruthless with ‘supply and demand’ convo.”

Kirsty Dunn (Te Aupouri, Te Rarawa) is an academic who is interested in indigenous plant-based lifestyles and ethics, as well as wider issues around food sovereignty and decolonial diets. She, too, has struggled with the question of how to describe her lifestyle. “To be honest, I am still trying to figure that out. I think ‘kaimanga’ best describes my diet and ethics, because principles, values, concepts within te ao Māori, such as whakapapa, manaakitanga, kaitiakitanga, and tino rangatiratanga, are becoming more influential in my decisions as a consumer, as a parent, and of course as tangata whenua.”

Although she sometimes uses the word ‘vegan’, she feels that it is inadequate, “primarily because I think that veganism often doesn’t acknowledge the cultural, economic, geographical realities of many people.” She says that when it comes to the ethics of what we eat, Māori perspectives in this area are useful for critiquing not only intensive agricultural systems and the rationales for those, but issues with veganism too.

Like Waimirirangi and Tamoko, Kirsty and her whānau view their dietary choices holistically: “As part of our kaimanga we are also trying to reduce plastic packaging, and to grow more of our own kai. And while these things are great, I’ve also realised how much we rely on convenient kai – alternative choices can be harder and more time-consuming.” Not everyone is able to do this, she says, and the kaimanga kaupapa involves acknowledging that. “Whilst individual choices are really important,” she tells me, “it is also important to look at things on a macro level and consider the role that capitalism plays in all of this.”

Te Rua Wallace (Tūwharetoa, Te Atihaunui-a-Pāpārangi, Te Arawa) decided to change her lifestyle a year ago, after realising the impact her dietary choices were having on the environment. Now, she says she tries her best to avoid eating food that comes in plastic packaging. She tells me that, while some people have been critical of her lifestyle, most of her whānau and friends have been supportive. “The biggest challenge has been me. This journey has been a huge mental game with getting out of habits and not giving into temptations.”

There is no ‘one size fits all’ when it comes to dieting and eating, Te Rua says. “My only hope is that people find an environmentally-friendly diet that works for them. They may not make many changes, but my hope is that whānau create healthy intergenerational eating habits.”

Raniera, too, acknowledges that there are different approaches and places to start. “It all depends on the individual’s intentions,” he tells me. He began with vegetarianism, and that gave him the confidence to take the next step. The important thing is to be willing to move out of your comfort zone. “Comfort in this instance could be cheese, milk, or eggs,” he says. “I have nothing against vegetarianism, nor anyone for that matter, it is just about being clear on the reasons why will make the process a lot better and easier.”

I ask Raniera what he thinks about those who, for example, eat seafood because their tūpuna did, or say that they would eat meat if they were hunting it themselves – or those who avoid eating animals but are reluctant to call themselves ‘vegan’ because they wear bone, feathers, and other traditional Māori adornments that are made from animals.

“I am actually for people who provide for their whānau using traditional practices. It’s about survival and connection for some of our people. As Māori, we have strong connections to different elements of the environment and it is through whakapapa that strongly acknowledges that. Through Tāne, Tangaroa and so forth. Loads of people don’t want to acknowledge that they’re vegan because of what comes with it. It’s not just about the food you consume. It is much more and deeper than kai.”

Raniera has some advice for those who are thinking of making a change. The important thing, he tells me, is that the change is right for you. “If you are curious, do your own research, as it will build your own perspective on dieting. Match your research with execution. Try the diet, and monitor yourself. Constantly ask yourself the question, ‘How do I feel today?’ Examine that question through all of the dimensions – physically, mentally, spiritually, and emotionally. If you feel good, continue the journey. If you don’t, try something else.”