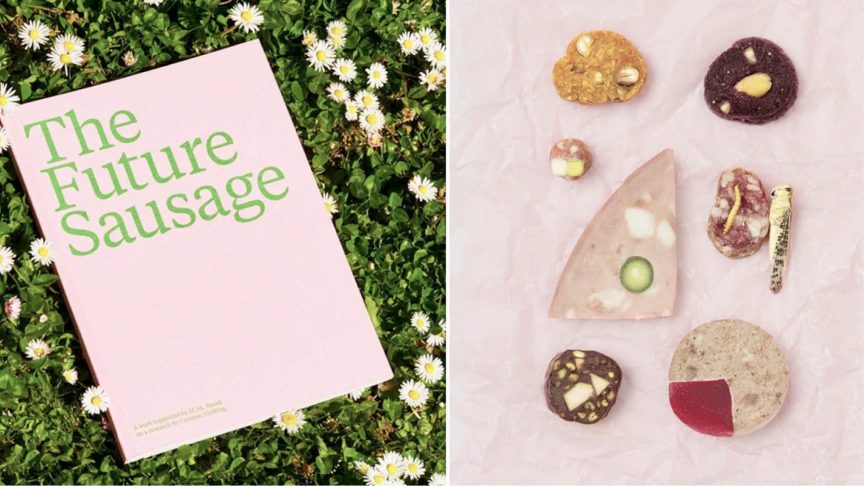 The humble sausage is a 5000-year-old invention, and that is exactly the beauty of it, Dutch food designer Carolien Niebling says. After all, what better way to judge just how innovative a product is through its longevity and whether it stands the test of time? This is why Niebling has embarked on a journey to redesign the sausage to include less meat for a more sustainable future. While visiting for Auckland’s 2019 Semipermanent festival, she has a chat about the future of food, why more designers need to be influencing the food industry, and more.

If you’ve ventured over to Europe recently, you’ll have noticed that in many parts of the continent, people love cured meat. Turns out it’s for good reason: cured meats – like the sausage – were considered one of the best foods to travel with, particularly in colder climates like Northern Europe, as it was protein-rich food that would be able to last for months at a time.

So it’s no surprise then that Dutch born, Switzerland based food designer Caroline Niebling saw a spark of beauty that hadn’t been explored yet in this age-old invention. The sausage has been around for all these years and has not gone obsolete, so could it be a key to the future of food?

The challenges the food industry is facing are no secret. A report by the Food and Agriculture Organization of the United Nations released in 2017 found that humankind’s ability to feed itself in the future will be in jeopardy due to pressures mounting on natural resources, increasing inequality and the fallout from climate change. Because of this, the sustainability of the meat industry has been under intense scrutiny, with a bunch of possible solutions for the future of food springing forth, such as lab-grown meat and imitation vegetarian meat products.

“What is really funny about ‘the future of food’ is tomorrow is also the future of food,” Niebling says. “We constantly have to eat again and again and again. So, I think education is the most important thing. It’s not what we eat, it’s why we eat. Sometimes, meat consumption is the problem. But you have this tendency of people going ‘We have to stop this, it’s bad, move on, don’t look back’. That’s also not the best solution – you have to understand why you’re doing what you’re doing.

“It’s a funny balance – everything we eat has no natural enemy at the moment. Imagine if we did not control boar, deer, chickens, pigs, or turkeys. They’d eat all the young little leaves and there would be no land. In my idyllic picture of what the future is, you’d always eat a little bit of meat because you have to live side by side.”

Niebling says a lot of the options on the market that address the sustainability issues of the food also present problems: imitation meat products emit the beauty of some of their ingredients, while everybody becoming vegan would put pressure on resources, too.

“With growing meat [in a lab], if we’re going to wait for this to be economically viable, we’re going to be waiting a very long time,” Niebling says. “I wanted to reduce the amount meat we eat, but by using the existing industry and not by creating a new one. We have a very old, very good running industry so why not use that? That’s when I found the sausage.”

The sausage, she says, is one of the oldest creations of humans that still sticks around to this day, at 5000-years-old.

“Let that sink in: 5000 years ago we started to make a cured sausage. That’s insanely long,” Niebling says. “There is a lot of efficiency to be learned from looking at the past. I like to combine it with looking at the future, because there was also all these limitations we don’t have anymore.”

That journey of combining past and future that Niebling has taken the sausage on has been meticulously documented in her book, The Sausage of the Future. The book looks at the sausage’s cultural history, as well as the sustainability potential for it going into the future. It won a Grand Prix at the 2017 Design Parade Competition in France, and was also presented at the 2017 TEDxGeneva event in Switzerland.

She says it was really important to visualise these sausages in a new way, not just like a cookbook, and highlight new ingredients being used in their conception. Some of the more interesting ingredients include a sausage partially made of insects, as well as a sausage made with blood and chocolate.

“One of the most amazing ingredients we underestimate is blood,” Niebling says. “Where there’s meat, there’s blood, and now it’s being thrown away. It’s an amazing source of iron and yet people wouldn’t eat it because of the ‘yuck’ idea. The blood sausage in the book I paired with chocolate – it’s a chocolatey-brown sausage, which plays with the psychology of people.”

“It comes from La Cucina Povera – the ‘poor man’s cuisine’ – in Italy that used to make chocolate pudding after the slaughter of a pig in celebration, so they made pudding for kids with blood.”

She says this whole concept plays into the psychology of disgust, and now days, we won’t look at eating anything found outside a supermarket.

“We’re looking for an expiration date, if it doesn’t have it then we lose all our senses and we consider it inedible. It’s quite funny and a bit sad too because you know the expiration date is something intended by producers, there’s no rule,” Niebling says.

She says this also plays into the lack of variety with seafood in New Zealand’s stores.

“I’ve been going to fish markets, supermarkets and more and you find only a few types of mussels and other seafood. I spoke to Tony [Clooney owner] and he said a lot of varieties are shipped off to china or used for export because there’s no market here. That would be a big opportunity to change and show the consumer what is edible from New Zealand,” she says.

Niebling says every locality has their own take on the sausage, and it was amazing to see how different parts of the world spark different ideas.

“It’s so incredible to see what they came up with, what I was hoping for is all the sausages have a different problem they solve. They did that, as it’s not just being a good food item, it’s a good food item and using fish carcasses sustainably [Everybody Eats’ creation].”

As for where the future of food is heading, Niebling says she hopes it heads in the direction of consumers starting to pay value for money when it comes to meat.

“I live in Switzerland and people have a lot of prejudice about it being expensive, but one thing we do that’s amazing is we have the strictest rules for meat producing and collection. The animals have to be outside, they can’t be on antbioitics. It’s extremely ethical and no one knows about it, as it’s not something they do to show off. They do it because it’s always been like this, and Swiss people are so happy to spend three times as much because of it, also they don’t know better.

“People ask me all the time, you work with existing industries, but they will still lose their job if people eat less meat. Or, why don’t we start to pay value for money? A well raised, nice, happy piggy – you pay the same amount, and eat less meat, but much better meat. Why is that not possible? The consumer eats less but better, the farmer keeps less, but makes better. Switzerland has taken off maybe because people have more to spend for food, but in a way it’s like, ‘Why wouldn’t an animal be treated the right way and be outside?’ It’s quite crazy we have to get back to that.”

She says overall, her core mission is to challenge the industry.

“One of the bizarre things I’ve discovered is there are no designers in the industry. There are food designers doing experiences, but there is not really people looking at what we can optimise.”