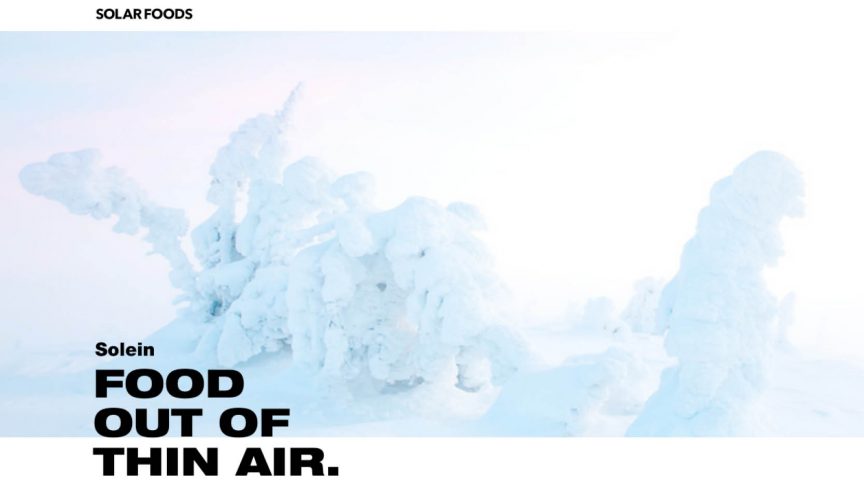 An innovative startup company from Finland has piloted a new alternative protein product made out of carbon dioxide from the atmosphere. This meat alternative has the potential to address the environmental evils of both the agriculture industry and climate change.

The startup is confident it will be able to get the product on grocery store shelves by 2021. The product, named Solein, will likely be sold first as a liquid protein source via shakes or yogurt. This is different than alternative meat competitors, now including conventional meat giants like Tyson, that primarily sell alternative proteins as nuggets or burgers.

According to Solar Foods, Solein is “100 times more climate friendly” than all other animal- and plant-based proteins. In fact, the company also claims it is 10 times more efficient than soy production in terms of carbon footprint.

How does it work? The company says it mixes water molecules with nutrients like potassium and sodium and then feeds the solution plus carbon to microbes. The microbes consume the nutrients and produce an edible substance that looks like flour and is 50 percent protein.

Lab-grown meats are an expanding industry, but Solar Foods captures carbon dioxide from the atmosphere to feed to microbes instead of using sugar like most other companies.

“Producing Solein is entirely free from agriculture — it doesn’t require arable land or irrigation and isn’t limited by climate conditions,” a Solar Foods representative told Dezeen. “It can be produced anywhere around the world, even in areas where conventional protein production has never been possible.”

The company has big ambitions and believes that if the alternative meat industry is indeed going to overtake the conventional meat industry as predicted, leading corporations like Impossible Meat and Beyond Meat are going to need to experiment with and use innovative sources of protein beyond pea-based products.