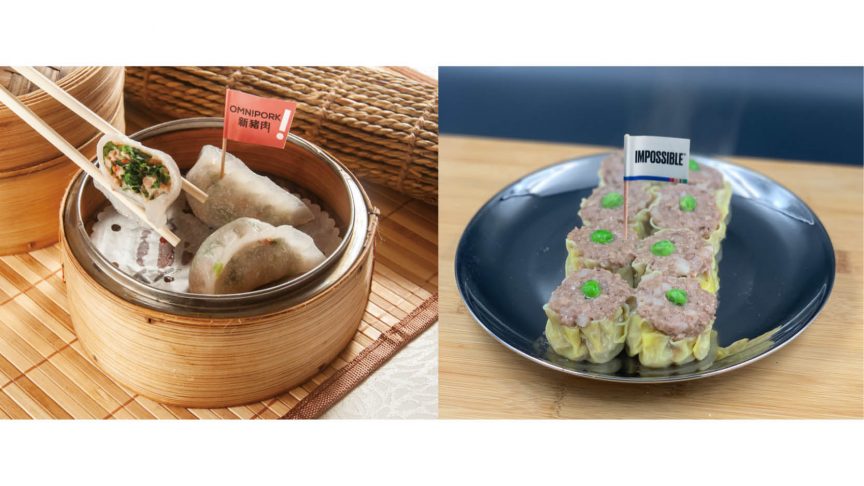 Global and regional plant-based brands have been expanding to new markets in Asia-Pacific for past few years, but almost no-one entered the mainland China yet (with exception of the limited launch of JUST Egg).

It is starting to change now.

Green Monday Group, which owns Omnipork has held an official launch event in Beijing. The group announced that Omnipork has started rolling out at selected hotels and restaurants in China, beginning with Grand Hyatt Beijing.

In total over 180 foodservice outlets in Beijing and Shanghai will offer Omnipork in the next two months.

On November 29th (Black Friday), Green Monday Group is launching Green Common online store at Alibaba’s Tmall Global platform, which will make Omnipork and ~40 other plant-based brands available to mainland China consumers. The selection will include Alpha Foods, Califia Farms, Daiya Foods and Gardein, which are all the brands that Green Monday is already distributing in HK and other markets.

Notably missing is Beyond Meat, for which Green Monday Group holds exclusive distribution rights in selected Asian markets. Beyond will presumably enter China on their own in the future, possibly setting up separate manufacturing there.

Impossible Foods is also making moves in China, recently showcasing its plant-based meat during China International Import Expo in Shanghai, where it expected to serve 50,000 samples to visitors. The dishes created with Impossible’s meat by celebrity chef Jeremy Leung included siu mai dumplings and shi zi tou meatballs.Despite various media reporting the event as “the first taste of Impossible Foods in China”, there is a restaurant in Shenzhen that has been serving Impossible Burgers for months, bringing the product from Hong Kong, just across the border.

On China’s most popular type of meat – pork – the company’s founder and CEO, Pat Brown said in the Bloomberg interview at the event: “We already have very good prototypes of plant-based pork. It’s really just a matter of commercialising and scaling that.” (in the US, Impossible Foods is already offering “plant-based sausage” to two selected pizza chains).

Impossible Foods will likely have to go through regulatory hurdles to start officially selling the product to consumers in China and might be even forced to change the recipe and/or production process: as reported by Financial Times, there are restrictions on use of genetically modified ingredients in food sold in China (Impossible has openly embraced GMOs, both in making their plant-based heme as well as using genetically engineered soy protein as the main ingredient).

Possibly that’s one of the reasons why Pat Brown has been talking about setting up sourcing and manufacturing in China. The company has also recently started advertising a China Development Director position in Shanghai with a focus on preparing a market entry strategy and building key relationships.

My take:
From both economic and mission/impact standpoint, China is obviously the Holy Grail for all plant-based startups – the largest population with already huge and one of the fastest growing animal meat consumption on the planet. But it is also one of the most tricky markets to penetrate. Two largest American players, Beyond and Impossible, seem to be taking a measured approach, both considering setting up local manufacturing, which will surely take some time. Omnipork, on the other hand, is already there (as of early November) and hailing from Hong Kong with the bulk of the production done in Thailand, it seems well-positioned to start addressing the Chinese market. The price will likely be one of the challenges: even with all the recent spikes of animal-based pork due to African Swine Fever, Omnipork is about 2-3x more expensive. That’s why it makes perfect sense for them to start the expansion from high-end hotels and restaurants.