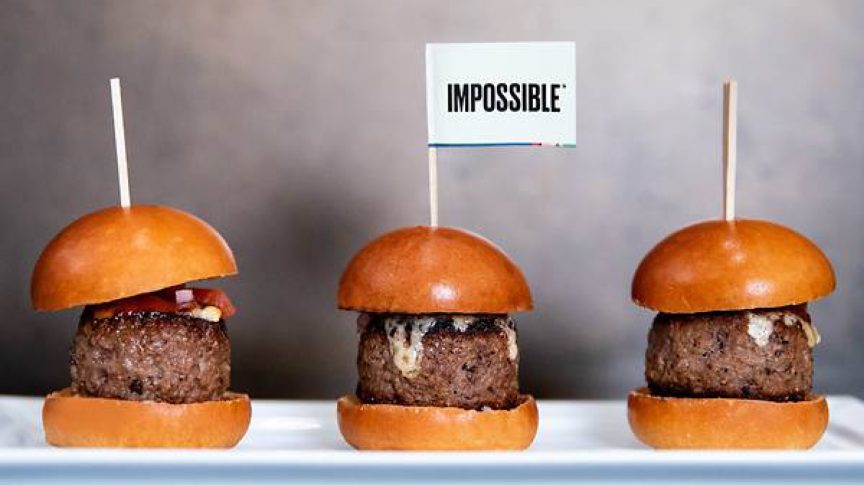 When Beyond Meat went public on the NASDAQ last week, investors expected the offering to be big — but no one predicted that the company would be valued at over $3 billion before the day’s end.

In short, plant-based meat alternatives have officially emerged from their niche of yore, and into the mainstream. And Beyond Meat and its ilk — New York’s Oatly, Impossible Foods, Soylent, Silk and more — are part of a larger shift in our relationship to how, what and why we eat.

This shift has been, and continues to be, heavily influenced by the tech scene. Soylent was born out of a Y-Combinator startup team trying their hand at Silicon Valley’s lifehacking movement. Impossible Foods was founded by a Stanford biochemistry professor experimenting with plant-based replacements for muscle tissue in meat alternatives. And alternative meat startups are backed by the same venture capital that propped up the likes of Facebook and Uber.

Notably, the latest wave of meat alternatives startups are backed by the same venture capital that propped up the likes of Tesla, Lyft and Nest. On paper, a “fake burger” may seem worlds away from an electric car, but the core of the belief is one where technology holds the key to solving some of the biggest challenges we face.

The end of Big Milk and the rise of Soylent

When it comes to plant-based alternative foods, the American dairy industry has, by far, faced the greatest number of changes in recent years. Products like soy milk, almond milk and oat milk have made such an impact on American diets that dairy farmers are literally suing for rights to exclusively use the term “milk.”

While almond milk continues to take up the bulk of milk-alternative’s market share, oat milk has become increasingly trendy, to the point of memeification. Oatly, the world’s largest oat milk producer, which runs its U.S. operations out of New York City, may be in part to credit for the switch-up.

Oatly presents consumers with a larger brand vision: one of high-brow, quirky environmentalism. The company’s website shares facts and figures about the Earth-saving potential of oat milk, highlights artists on its blog, and casually drops cringey-but-funny terms like “oatsome.”

Yet, no company quite encapsulates this shift in American tastes better than Soylent. The Los Angeles-based nutrition startup debuted its line of meal-replacement beverages in 2013, and marketed itself as a quick and easy solution for the busy computer programmer. Too busy coding all night to cook yourself dinner? Soylent’s got you covered.

Six years and $72.4 million in venture capital later, and Soylent is sold around the world, from Amazon to the aisles of 7-Eleven. The success may seem surprising to some (particularly those who still prefer food in its solid forms), but Soylent’s rise shows how tech culture has become American culture at large.

Meat: The next generation

With Soylent setting the stage for the new generation of food startups, Beyond Meat and Impossible Foods have taken that concept and run with it. The latter companies, both based in California, develop hyper-realistic, plant-based meat alternatives.

While meat replacements like veggie burgers have been around for many years, these companies are a new breed in terms of both product and operations.

Impossible Foods caused a veritable sensation when it launched its Impossible Burger in 2016. Unlike traditional veggie burgers — typically a patty formed with a combination of beans, grain and vegetables — Impossible Foods uses a combination of plant-based fats and molecules to craft its burgers, which are promised to be as juicy and flavorful as “the real thing.” (The burger even bleeds.)

Instead of settling for a substitute palatable to conscientious BBQ objectors, the new aim is to make something even foodies will want to eat. This mindset has a close parallel in the automotive world: Just like Tesla appealed to car owners who wanted an eco-conscious purchase but didn’t want to compromise on the driving experience, Impossible Foods and Beyond Meat want you to impress your buddies at the tailgate.

While Beyond Meat had raised $122 million in VC funding prior to its IPO, Impossible Foods has raked in $387 million of its own. And the sources of this funding indicate strong ties between this still-blossoming industry and the worlds of tech startups.

Impossible Foods, for example, received investment from UBS, Google Ventures and Horizon Ventures, among others — all firms associated with digital-oriented investment. Bill Gates has repeatedly invested in both Beyond Meat and Impossible Foods. Andreessen Horowitz, one of the biggest names in Silicon Valley VC, is a major investor in Soylent.

Even on an aesthetic and conceptual level, products like the Impossible Burger are marketed with a level of flair one might expect from the latest gadget or app. Their campaigns target even the carnivores among us, placing themselves in direct contrast to vegetarian pioneers like Boca Burger.

Read more at Built in NYC