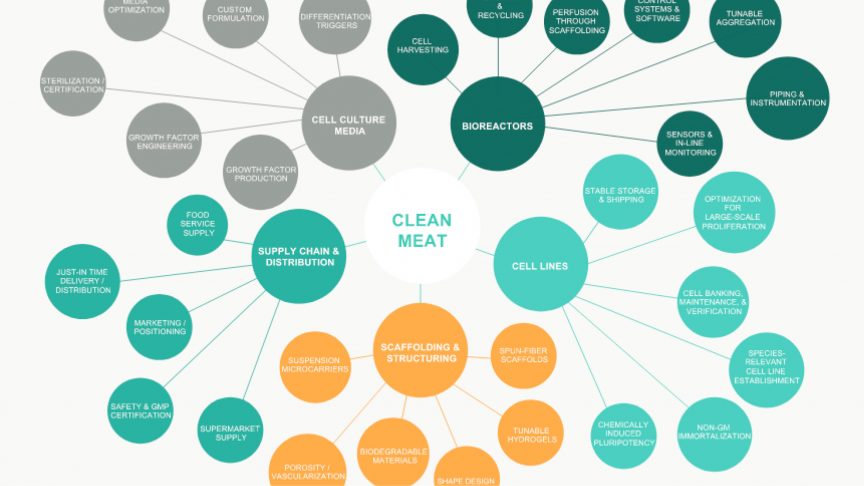 Advances in cell culture research are moving the commercialization of clean meat closer to reality, potentially yielding significant benefits in the areas of food safety, food security, and sustainability.

What is clean meat? And why is this field emerging now? Clean meat (also called cultured meat) is the term for genuine animal meat grown by farming cells directly rather than via rearing and slaughtering an animal. At its essence, meat is simply a collection of cells—predominantly muscle cells, with fat cells and a handful of other cell types, collectively called the connective tissue, contributing to its structure. All of these cells can be grown in controlled, sterile environments outside of the body of an animal, resulting in a product that replicates the sensory and nutritional profile of meat.

This idea has been contemplated for nearly a century, but only in recent years have tools been developed that enable the earnest pursuit of clean meat at commercial scale. Many of the under-lying technologies stem from unrelated fields that utilize animal cell culture, most notably, tissue engineering, bio-pharma, and cell-based therapeutics.

Cell culture advances from the bio-medical realm are now being applied to clean meat research, just as industrial biotechnology advances have been translated from biomedical applications (for example, using yeast hosts to produce low-cost insulin) into large-scale applications for food (utilizing essentially the same production platform for food processing aids like “vegetarian rennet” and other enzymes). This long history of translational R&D effectively provides the clean meat field with an accelerated path to commercialization because it leverages decades of research and billions of dollars of public investment into relevant fields like stem cell biology and developmental biology. This work has enabled a detailed understanding of the basic biology underlying the growth and differentiation of cells outside of the context of their native animal systems.

A Broad Array of Benefits

What are the benefits of clean meat relative to industrial animal meat production? The benefits to society and the environment conferred by transitioning from industrial animal meat production to clean meat production at a global level are likely the most compelling even if consumer considerations will ultimately be the largest drivers of future demand for these products. The global-scale advantages of clean meat can be categorized as greater food security and global resource equity, significant environmental and sustain-ability benefits, and decreased public health risks.

Because clean meat is grown in a closed, controlled environment, it can be produced without antibiotics and risk of contamination with bacteria like Salmonella and E. coli, common culprits of serious food borne illness. Correspondingly, preliminary data show that the shelf life of clean meat is significantly longer than that of industrially produced meat because no bacteria are present to accelerate the degradation process. This translates into less food waste at every step of the supply chain—from manufacturers to grocers to consumers. Additionally, clean meat does not contribute to the current distortions in global grain markets that result from the massive feed requirements of livestock animals, which are fed predominantly to consumers in wealthy countries. Thus, a more efficient production method promotes food security at home and abroad.

From an environmental perspective, the current life-cycle analyses of clean meat rely on preliminary assumptions, but estimate order-of-magnitude or greater reductions in water footprint, land use, and greenhouse gas emissions relative to industrial meat production. The increased efficiency—and thus lower resource requirements across the board—of clean meat is due to fundamental thermodynamics: this production method does not rely on shuttling calories through the metabolizing, moving, breathing, heat-generating body of an animal in order to obtain a small fraction of those inputs as meat. At scale, production of clean meat is predicted to be inherently more sustainable than current industrial animal agriculture.

Finally, clean meat addresses two public health threats associated with animal agriculture that are routinely downplayed relative to their enormous potential impact: bacterial antibiotic resistance and outbreaks of zoonotic disease (infectious diseases that jump from animals to humans). Both of these phenomena have a high rate of emergence from concentrated animal farming operations, and specific antibiotic resistance genes and individual strains of zoonotic dis-eases can often be traced directly to animal farms. In an increasingly globalized world with a dwindling number of effective antibiotics in our arsenal, these threats pose a very real risk of catastrophic consequences.