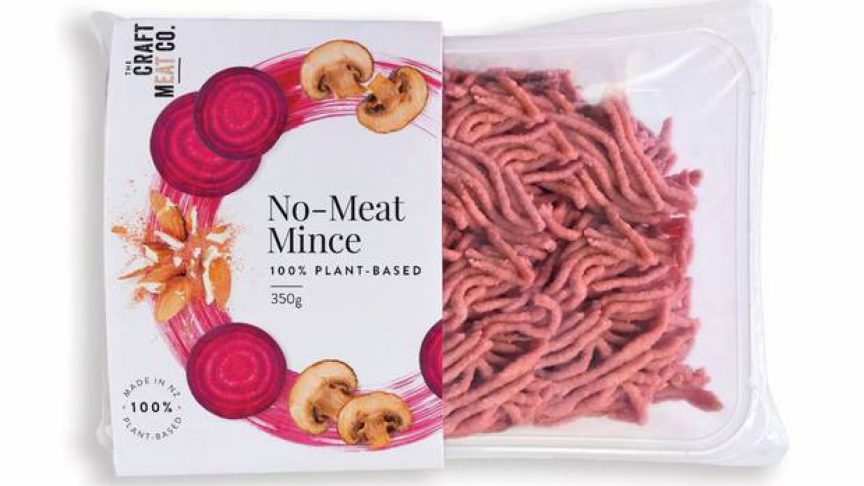 A Kiwi company has launched a meat-free mince in a bid to meet demand from people wanting to reduce their meat consumption.

Dunedin firm the Craft Meat Company has developed a 100 per cent plant-based mince made from mushrooms, tomato, almonds, coconut oil and soy protein which will hit supermarkets shelves this week.

Grant Howie, co-owner of the meat company, said it decided to launch the meat-free mince after taking ownership of parent company, Fishers Meat – a traditional butcher – and getting feedback from his daughter.

“My youngest daughter became a vegan two years ago, so when I bought the meat company she said: ‘why don’t you make something I can eat’, and I realised there was a growing trend for people to eat less meat or to eat no meat at all.”

Howie said research had shown more than 30 per cent of Kiwis say they are actively looking to reduce their animal protein consumption by having a ‘meat free day’ at least once a week.

“It’s this new flexitarian consumer segment that we are primarily targeting, although, of
course, vegans and vegetarians will also be key consumers.”

Co-owner Sherie Howie said the product closely resembled traditional mince and was designed to be cooked into meals like regular mince.

“In some instances, you can’t even tell the difference whether it is meat or not”, Sherie Howie said.

But alternative meat options have created a stir in the past in New Zealand.

Earlier this year Air New Zealand came under fire for serving up its meat-free “Impossible Burger” to premium customers. The product is produced by an American company.

New Zealand first MP Mark Patterson called the promotion of the burger a “slap in the face” for New Zealand’s red meat sector.

“The national carrier should be showcasing our premium quality grass-fed New Zealand red meat, not promoting a product that has the potential to pose an existential threat to New Zealand’s second biggest export earner,” Patterson told the Herald at the time.

The Howie’s said their no meat mince was the first of an alternative range to be launched with plans to follow it up with no meat sausages, burgers and ready-made meals next year.