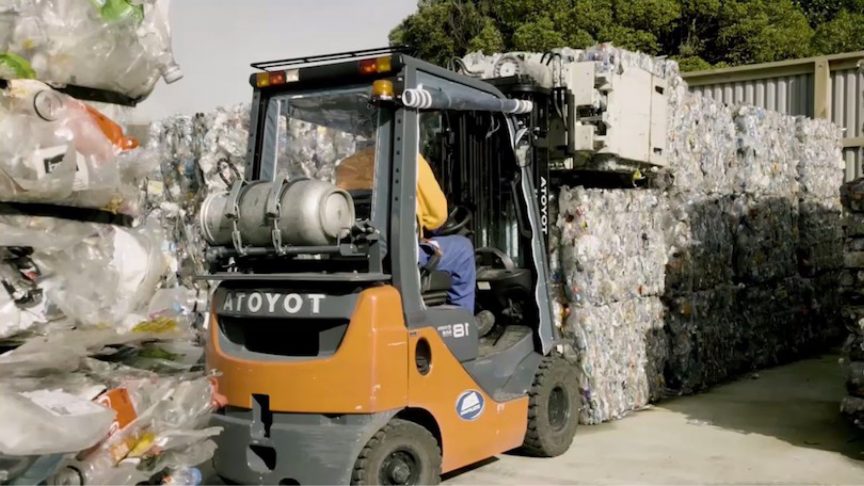 Tonnes upon tonnes of plastic waste with nowhere to go — there’s no easy solution, but for one group of Kiwi businesses, simply doing nothing was not an option.

Until earlier this year, even the most diligent recyclers may not have given much thought to what happens to that plastic bottle after it’s been deposited in the correct bin and taken away by the big truck.

But China’s recent decision to stop accepting discarded plastic from other countries brought an issue that many had been ignorant of into sharp relief. Since 1992, the country had bought 45% of the world’s plastic waste and recycled it into new products, but instituted a ban on January 1 this year, citing local environmental concerns. New Zealand had been sending 15 million kilograms of waste to China a year, mainly mixed paper and mixed plastics.

While the move is undeniably worrying — researchers have calculated that by 2030, the ban may leave 111 million tonnes of plastic waste with nowhere to go — an upside is it’s forcing people to take action.

“We’ve been moving plastic waste issues out of our backyard and into someone else’s,” says James Griffin of the Sustainable Business Network (SBN). “Now there’s a key focus to actually sort it out ourselves and take responsibility for our own waste.”

“We’ve done qualitative research across importers, packaging manufacturers, brands, retailers, right through to the end-of-life processes, to understand what are the key things that need to happen to enable a more circular economy of plastic,” says Griffin.

A circular economy is an alternative to the traditional “take, make, dispose” linear economy in which resources are kept for as long as possible, maximum value is extracted from them and at the end of their life, they’re recovered and regenerated.

“Businesses are realising that because we’ve been so entrenched in how we’re using plastic packaging — because it’s been so cheap and does such a good job — we haven’t got the end-of-life systems,” says Griffin.

The aim is to create a “closed loop” system for plastics, says Griffin, where it can be reused constantly without leakage into the environment. This requires a fundamental shift in approach, not simply more recycling.

While the official report isn’t being released until the end of October, some of the study’s findings will be no surprise. Where possible, businesses need to use less plastic in packaging and crucially, minimise the types of plastic they’re using, keeping to either PTE (no 1) or HDPE (no 2). “All the rest are problematic in the current scenario,” says Griffin.

But of course, minimising plastic is a lot easier in some areas than others. While taking our reusable bags to the supermarket instead of using single-use plastic ones isn’t too much of a stretch for most of us, what about scenarios where plastic is necessary for food safety and prolonging shelf life?

“The whole of the life cycle of the product, including the packaging, needs to be looked at,” says Griffin. “Certain plastic packaging may be extending the life of the product, or it may be keeping it sterile, so to discount that packaging because it’s plastic may not be the best course of action.”

Plastic is lightweight, relatively cheap to produce and does a pretty good job, which is why it’s everywhere. “There are alternatives that could deliver as well as plastic in certain situations, but often the price is quite different,” says Griffin. “So the question is who foots the bill — are customers willing to pay more?”

Food safety is particularly important with products like bacon, ham, pork and chicken — Freedom Farms’ bread and butter — and currently, there’s no magical solution to plastic packaging, the company says.

“The reasons we need to address the amount of waste created are really clear, but when it came time to decide what action to take, things aren’t as straightforward,” says Hilary Pearson of Freedom Farms.

“The conversations we’ve had with customers centre around a couple of main ideas: less rubbish to landfill, without compromising on food safety or creating more food waste,” says Pearson.

Soft plastics, such as those used for Freedom Farms’ bacon and ham, can be recycled, but washing the plastic in hot soapy water, leaving it to dry and then taking it to the soft plastic recycling bins at supermarkets is a big ask for many consumers. Similarly, the number of New Zealanders willing and able to manage “home”-compostable packaging is unknown, and plenty of confusion exists around the best way to manage biodegradable or compostable products.

Freedom Farms’ chicken trays are made from recyclable PET plastic from Flight Plastics, and the company is in the process of transitioning its sausage trays to the material as well. Flight opened New Zealand’s first integrated PET recycling and manufacturing facility at its Wellington plant last year.

“Opportunities like Flight Plastics developing are fantastic,” says Pearson, “because we’re making use of consumer behaviour that already exists. Putting a soft drink bottle in the curb-side recycling bin is pretty habitual,, so rinsing a meat tray and putting that in the bin isn’t asking a lot. It’s a nationwide simple solution, and creates that circular flow of resources that makes it sustainable. But it remains to be seen whether it can become the norm for soft plastics too.”

While a change in consumer mindset is certainly required, with the status quo, it’s little surprise that many of us put recycling in the too-hard basket. Collection criteria differs in different regions — something you can put in your council recycling bin in Auckland may not be accepted in Wellington, for example.

“It’s very confusing for customers, and it’s an issue for brands to put specific guidelines on their packaging when it differs across the country,” says Griffin. “The need for standardised labelling and a more standardised collection process is really clear.

“Australia has a national labelling system, as does the UK, and there’s work under way looking at adapting the Australian system for New Zealand,” says Griffin.

Conservation minister Eugenie Sage set up a government taskforce in response to the Chinese plastic ban in May, which is due to report back to the minister later this month.

In a statement, Sage said that over the medium to long term, government may set national recycling standards, but investing in on-shore processing and reducing the waste New Zealand generates is the main aim.

The ideal scenario, says Griffin, is that the recycling process become self-funding. “The idea is that the revenue received from recycled plastics which is then on-sold to manufacturers pays for the processing,” says Griffin. At the moment it’s really only a certain amount of plastics that are generating an economic return.”

But to do that, the quality of the plastics that are being recycled needs to improve, as does the level of recycling happening.

“Many brands are wanting to make the right decisions about their packing innovation,” says Griffin, “but it’s complicated — no one organisation can solve it on their own.

“We’re trying to bring organisations together and enable some support for the more systemic changes that need to happen.”