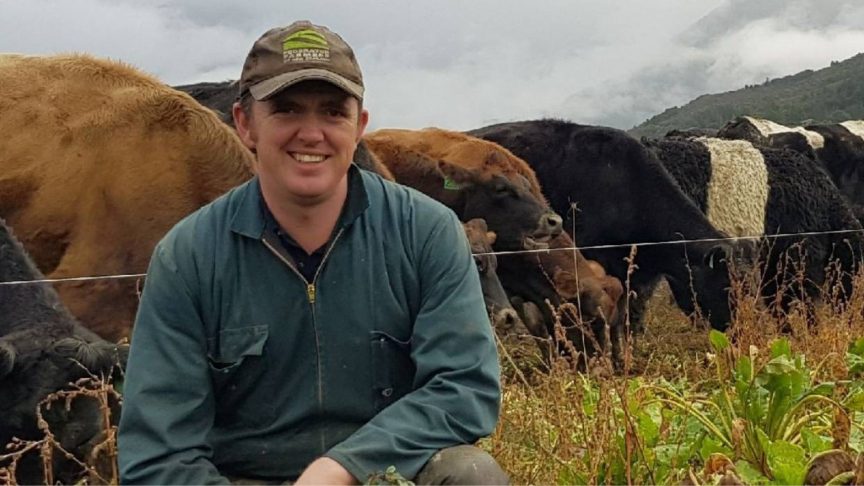 “The farm gates need to be opened again so that we can show what we are doing, but also see what our communities want us to be doing.

“As dairy farmers, we have to be proud of the industry and proud of what we are doing. If we are not proud of it, then we need to make changes.”

Langford, who is the provincial president for Golden Bay, says the industry needs more positive stories to be told.

“Not only that, we need to understand our bad stories so these can be addressed and turned into positive stories, taking the public on this journey with us.

“Our farmers do amazing things on-farm, with the majority doing more than just complying with environmental requirements, so it is difficult when we come under fire.”

In his role with the Feds and as a dairy farmer, he has copped his fair share of hurtful abuse, but says he can see the other side of the coin.

“Our marketplace, consumers and people of New Zealand are passionate about how they want their dairy produced.

“It’s our job, as farmers, to recognise their concerns and try to meet their production expectations. This will be an evolving goal; the bar will continue to be raised higher.”

He believes more could and should be done to reduce the urban-rural divide.

“From Facebook and Twitter, through to church groups and retirement homes. When we have school visits to the farm, many parents show up as well.

“The parents are often very curious, which is fair enough. They often have many questions ranging from simple to quite technical, all of which make us analyse what we are doing on-farm, so they get informed and we improve what we are doing, a win-win for both parties.”

He hopes that through his role as vice-chairman, he will be able to be a voice for dairy farmers and help to enact changes so that more positive stories are told.

“Essentially my role will be to support Chris Lewis, the chairman of the dairy group, as much as I can and generally be his right-hand man.”

“A large part of my role is providing advice, opinions and thoughts on issues to Chris as well as stepping in for him at meetings when he is unavailable, keeping the dairy executive at the table on important issues.”

With two years of low payouts now behind us, he believes water and how farmers deal with issues will be the biggest challenge for the industry this coming season.

“We need to have realistic discussions on how we can improve the water quality but at the same time, have a realistic understanding of the waterways and what condition they are in.”

He says it is hard for farmers today, who are “getting attacked constantly”.

“The perception is that because we are a farming community we have dirty waterways, but actually in the Golden Bay community, we have 98 per cent clean and swimmable waterways.”

He hopes to create a new farming image that everyone in the community believes in.

“We are producing dairy in an environmentally sustainable way, which we should promote as an example to New Zealand. Beautiful, clean, swimmable rivers and profitable sustainable farming. What’s better than that?”

But again, being aware of the other side is important. At a meeting in Golden Bay, he could see that people were just as passionate about water and the environment as farmers were about dairying.

“You begin to understand that their concerns are genuine and it is a matter of everyone, not just farmers, working together to find solutions and address the issues. This may require changes not only on-farm, but also in the communities to meet these challenges.”

The role is not entirely new to him – he was previously the second dairy group vice-chairman after Lewis who recently took over from Andrew Hoggard.

“The structure is the chairman, the vice-chairman and then another vice- chairman – sort of like a back-up plan.”

“Being the second vice-chairman has been a great training ground for me and having that third person means there is always someone available when Feds are called on.”

Having worked on farms ranging from System 1 to System 5, gives him a good understanding of the industry and its farmers.

“I am a passionate Fonterra man so hopefully I can keep Chris honest – he supplies a different company, but I’m sure he’ll be back to the right side before his time is up.

“I like to think I am a big-picture type of person who thinks about what is coming. I don’t get hung up on what is happening today, more how we can best prepare for the future; always an optimist.”

Growing up on the family farm at Golden Bay, he was more interested in the management side of farming rather than the practical, although milking is his favourite practical part of farming.

“Doing cashflows and budgets, pulling everything apart and then putting it back together to get a good business model is where my interest lay.’

In 2001, he enrolled in a Diploma in Farm Management At Lincoln University and graduated in 2003.

During this time, he met Tyler McKenzie, a city girl from Invercargill, and they married in 2006. They have three boys, Lewis, 11, Gordie, 9, and Alfie, 8.

In 2003, the Langford family bought the family farm at Bainham, near Collingwood, from his uncles. He went straight from university to the farm which he ran alongside his brother, making them the sixth generation on that farm.

“We learnt the best way you can – by making silly mistakes.”

He has been a member of the Feds since 2013 after being “dragged” to a provincial meeting.

“I ended up walking out of the meeting after signing up right then and there with the role of dairy chair for Golden Bay and haven’t looked back.”

The Langford family business went through a growth stage, buying or leasing a new farm every couple of years, and each time he and Tyler moved on to run and establish it.

“Tyler and I were the gypsies of the family business – we have moved six times since 2003.”

Two years ago, they broke away from the family business and bought their first farm – a 93ha block milking 330 cows once-a-day.

“We debated the whole twice-a-day system and staying seasonal which meant employing a staff member but decided by going OAD. We could do it ourselves and still meet our profit targets.”

They run a low-cost system and are targeting 105,000kgMS this season.

“By keeping it simple and not complicating things, we can do it ourselves and hit our goal.”

They are constantly analysing the true cost of doing things on-farm. For example, feeding fodderbeet, which, although it is a cheap feed, complicates their system.

“And when labour is included, it is just not worth the effort and the mud. However, is does still work for us as a winter feed.”

“I am huge proponent of simplicity, as this is a key driver to the success of our system.”

They only do AI for 12 days, using the YWait programme which gives them enough replacements over that short period and cuts down the work during calving as well as costs at mating.

“We are always looking at the issues on-farm and what we are doing. It’s about working smarter, not harder.

“Changes to our calving and mating have allowed us to reduce the number of bobby calves to 15 per cent from 65 per cent and capture more of the beef market.”

He tries to get out of bed before the sun comes up, although he doesn’t always succeed.

“It is a bit of joke between Chris Lewis and Andrew Hoggard. They joke that I am not out of bed because the sun isn’t up – sometimes that is true.”

“They can joke all they like because I have one-up on them.  I am the only one on the dairy executive that has a full head of hair.”

“Later starts mean I get to see the kids before they go to school and when they get off the bus in the afternoons.

“Because I’m not milking in the afternoons I can do jobs on the farm with the kids, or take off to the many beaches Golden Bay has to offer.

When the Feds call, it’s sometimes milking before heading to Wellington for the day and returning in the evening. But when needed they call in a relief milker.

He encourages other young people to get involved with organisations such as the Feds as they always need fresh ideas.

“I have been given many amazing opportunities since joining. Why would you want the old guys making the decisions that will be affecting our generation?

“Sitting in board rooms opposite industry heavyweights was a bit daunting at first, but encouraging to see them listening to my ideas. And going to field days and seminars – you just never know what pearls of wisdom you might learn.”

Away from the farm, they enjoy travelling and recently spent a few weeks in the US where they stayed with several farmers.

“It was great to spend time with a young couple sharemilking 150 cows indoors in Pennsylvania. They are dealing with the same issues around environment, markets and public perception.

“We tried ‘fake milk’ made from plant-based materials, not nuts, quoted as ‘Dairy Free, as it should be’. It was great to see what we are up against in downtown Chicago, Washington DC and New York.”

Bias against farming is just as evident in the US as it is here. While getting off the subway in New York, they were confronted by a PETA poster featuring a naked photo of actress Alicia Silverstone holding a sheep head with the caption “I’d rather go naked than wear wool. Wear your own skin. Let animals keep theirs. Wear Vegan”.

“It was slap in the face. It is fake news that is not right.

“It reminds us of the hard work we have to do to keep everyone happy – it’s tough going.”