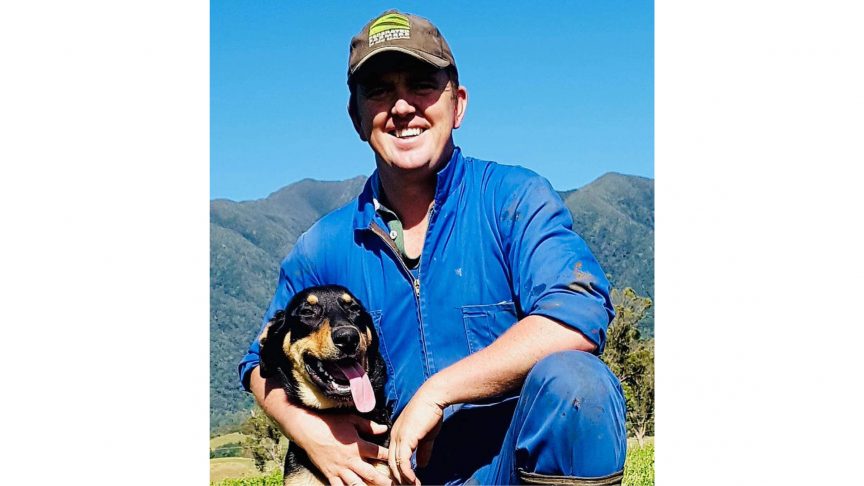 Wayne Langford – Co-op Farmer and Founder of YOLOFarmerNZ, is confirmed to speaker at ProteinTech 2019.

Wayne is dairy farmer from Golden Bay and when life got him down, he grabbed his wife and kids, jumped in the car and changed his life forever.

Over 700 days later, hear his inspiring story of how this one step, has changed his farm, his families life and the community he lives in. Hearing him speak will have you view your life/business through a different lense, challenge the status quo and most of all ask, are you ‘Living your Life?’

Read on for a bit more about Wayne…

Co-op farmer Wayne Langford knows what it’s like to suffer from mental illness. He’s the man behind the YOLO (You Only Live Once) farmer blog. He shares his story about owning up to his illness and how the YOLO project helped him cope with depression.

Most people who knew Wayne Langford knew this about him. He was 34, married to his wife Tyler and the father of three boys. He was a 6th generation dairy farmer who owned and ran his Golden Bay farm. He was a proud Fonterra supplier and was the Federated Farmers Dairy Vice Chairman.

On the surface things seemed good.

But underneath Wayne was suffering from depression, an illness he refused to name or discuss because he was worried he would be labelled weak.

“At first I noticed little things. Wayne was always someone who took joy in everyday things — that vanished. He shut himself off from his friends and his boys. He struggled to make decisions that in the past he had made with ease. He also lost interest in the farm which was something he had always loved. Wayne and I met at 18 and married at 22. We were always best friends and communication came naturally for us, but he stopped talking to me and that was horrendous.

“I felt like I had completely lost the person I married and I didn’t know what to do. Should I push him? Should I walk away? Should I let him deal with it in his own way? He’s such a typical ‘don’t talk about your feelings’ kiwi bloke.”

The couple battled on for almost a year before that conversation which brought things to a head.

“The YOLO project started on the morning of my birthday,” says Wayne. My wife and I decided that for one year we would do one thing each day to remind us why we were glad to be alive. To keep ourselves accountable we would post each day on social media.

“I clearly remember in the beginning I was like ‘oh I’m going to climb mountains, go bungy jumping’, all those sort of big statement things, but I quickly realised that’s not me — I’m not a mountain climbing type of guy. What really gives me joy is being with my family and friends, connecting and sharing with people in the community. So while we did go skydiving for YOLO day 400, my favourite YOLO to date was actually day six when we had a bonfire on the beach and cooked pancakes with the kids.”

At first the couple told family and friends he was celebrating life, but as time went on the couple revealed the mental health reason behind their project, and despite Wayne’s concerns they received nothing but support.

“The reaction was incredible. I started getting messages from people I had never met before, telling me their own stories and struggles and that was really humbling. That was when I realised that real strength is actually about being able to admit when things aren’t great.”

Before they knew it, the blog had reached the one-year mark, but buoyed by its effect Wayne and his family decided to keep the project going.

But while the concept may sound easy Wayne says it wasn’t always plain sailing.

“Some days it was really tough and doing a YOLO was the last thing we wanted to do. Some days it was just too busy and I settled for a positive thought or reflection. However, some of the best YOLO’s took place on the days we really didn’t want to do them.”

Tyler agrees that there have been moments along the way that have made her question the project but she’s forever grateful that it brought her back the man she loves.

“Sure, there’s times it’s 7.00pm at night when Wayne is dragging us up a creek in the middle of nowhere and I think really? But I know how important it is to him and I admire his determination. He still has hard days but the difference now is he can go to bed at night and start fresh the next day.”

For Wayne, the YOLO project has made him realise that dealing with his depression is about small steps and taking it one day at a time.

“I think farmers, in particular, face a lot of stress. We are constantly managing different stressors at different times — there is pressure from all sides. Most of the time you can cope, but then sometimes things just start to build up and it’s easy to tip over the edge. We never wanted the YOLO farmer to be a brag post but rather something everyone can do.”

The couple have both learnt a lot during their journey. Tyler says one of her biggest lessons was to just be there until the time was right.

“I think that morning of his birthday was just right for Wayne, he was ready to make changes. We started looking at life through a different lens. I thought the depression was a massive beast, something we could never tackle, but through YOLO Wayne was able to reengage and slowly bit by bit he came back to us.

For Wayne, the project has highlighted the importance of his family and loved ones.

“It’s changed the way I parent. I live in the moment more and realise what’s really important. If I say ‘no’ to something my boys will remind me to YOLO. It’s also had a positive effect on my relationship. My wife put down her whole life to help pick up mine and that’s something I will never forget.”