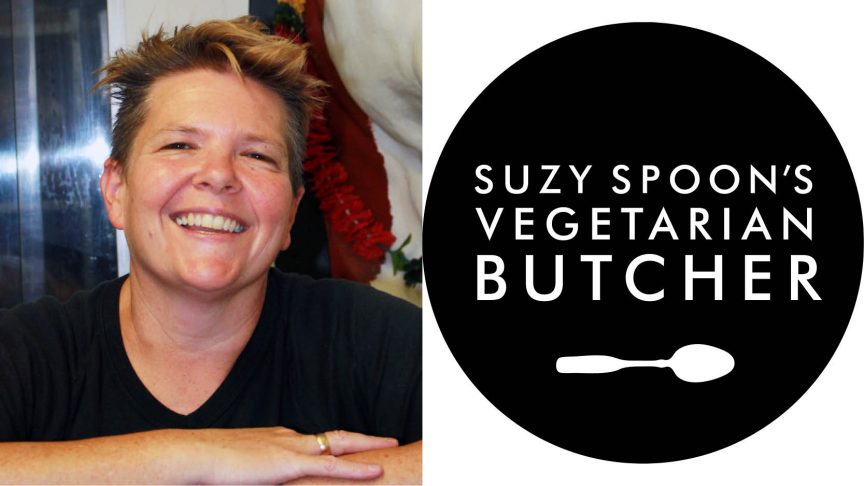 Meeting the protein alternative needs of customers, Suzy Spoon’s Vegetarian Butcher manufactures a range of plant based products in Sydney for the Australian consumer.

Suzy is driven by the needs of her customers for high quality, high protein meat alternatives that tick a variety of boxes.

Her customers demand clean label products that are superior in flavour, with familiar textures and shapes that work in traditional recipes and on the plates of busy families.

When I was a kid, one of my biggest fears was of being dragged into a Turkish butcher shop in Sydney’s Auburn while my grandmother shopped for liver and brains. Watching such items laid out in big, watery messes played havoc with all five of my senses – not to mention aninner sixth screaming from deep within, telling me that none of this was okay.

Fast-forward three decades and I love nothing more than taking my own children to the butcher to pick out plump, juicy sausages for the girls and fat patties and fillets for me and my husband. Surprising? Only until I tell you that the sausages in question are filled with polenta rather than mince, and the fillets are wheat protein, not chicken or beef. As a family, we’re in love with vegetarian butchers and – judging by the speed at which they’re opening globally – it seems we’re far from alone.

There’s no question vegetarian and veganism is on a steep incline in Australia. According to Roy Morgan Research, the number of Australian adults whose diet is all or almost all vegetarian rose from 1.7 million to 2.1 million (11.2 per cent of the population) between 2012 and 2016, and it seems we’re also the third fastest-growing vegan market in the world after China and the United Arab Emirates.

Yet, while many of us have been content – or simply put up with – old-school soy protein and wheat gluten products kicking around in the supermarket for the past few decades (data from market researcher Euromonitor International has shown Australia’s packaged vegan food market is currently worth $136 million and set to reach $215 million by 2020), it’s clear that many of us have been looking for a more luxurious alternative.

Enter the solution: meat-free ‘butchers’ throwing open their doors around the globe, at a speed which can only be compared to that of light. From the plant-based La Carnicera Vegtariana chain in traditionally meat-loving Spain and the original The Vegetarian Butcher in The Hague, Netherlands, to independents such as Monks Meats in New York City, each one coming to the party with displays filled with over-stuffed sausages, chunky steaks, large family roasts – and for something different, the odd ‘meaty’ lasagne.

Suzy Spoon, founder and owner of Sydney’s first vegetarian butcher Suzy Spoon’s, located in St Peters, says she is not surprised by the rise in vegetarian butchers. “I certainly don’t think this is a flash-in-the-pan trend, but the result of all the information we’re now exposed to thanks to the internet,” she says. “Most of us were kept in the dark on the issue of animal welfare and the environmental concerns of eating meat and animal products with every meal, but now that we’re all becoming aware, changes are being made and it’s about time.”

Speak to Spoon about the range of meat-free alternatives out there for conscientious consumers and she insists there’s still room in the landscape for cheaply made vegan sausages and schnitzels that can often be found in the chilled food section of the supermarket. “But as with meat, we too operate on a two-tier system; some families will have the budget for cheaper, machine-made products only, and others will prefer … artisan products handmade by a specialist,” she says. Spoon explains that some of her most popular products include polenta sausages stuffed with sun-dried tomato and basil and fillets made of seitan – wheat protein which can be used in everything from burgers to stir-fries. The biggest surprise? “They’re products that are just as popular with meat eaters as they are with vegetarians and vegans.”

Don’t have a vegetarian butcher close by and you’re keen to try some of the flavours? Suzy Spoon’s products are available in various health food stores and metro supermarkets, and you can also buy the products online. But if you’re waiting for a similar butcher near your home, she reckons you may not have to wait too long.

“There will always be a market for meat, but with every day that passes, the choice of vegan foods available get[s] better and better and when it comes to the rolling openings of vegetarian butchers, I’d say we’re only just getting started.”