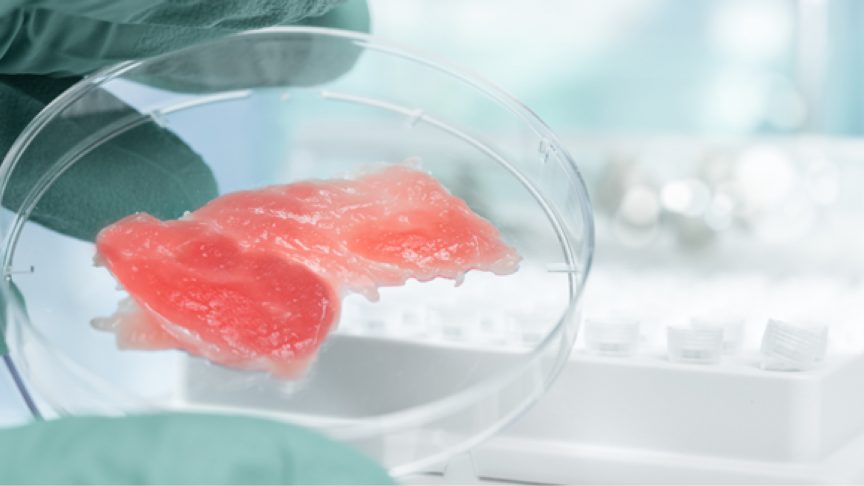 Meat: one of the most discussed food topics of the last years.

I’m not a doctor, neither am I a scientist, so I don’t have the appropriate skills to confirm or deny what the various world associations share daily about meat consumption, but one thing is certain – meat consumption hurts the animals and causes pollution. The FAO estimates that 14.5% of CO2 issued comes from livestock farming. Whenever you eat meat, think for a while about the cost to the environment, in terms of water, feed, and pollution.

What if I told you you can now have a juicy hamburger, and soon even a grilled pork chop, an healthy chicken breast or a tender beef steak, without hurting animals and with a much lower environmental impact? You think I’m crazy? No, I’m not. The so-called alternative meats are already available and will even gain more popularity as time goes on.

But what exactly does “alternative meats” mean? We could briefly classify it into two big macro areas: the plant based-meat and the cell-based meat.

NATURAL INGREDIENTS FOR A NEW IDEA OF BURGER

The so-called plant-based burger can somehow be considered as the natural evolution of the soy-burger, quinoa-burger and so on – 100% vegetal, high protein content, but frankly speaking, often looking and tasting like a wet card box.

These patties, instead, look, smell and taste exactly like an “authentic” beef burger. How is it possible? Through an awesome food engineering job.

The full recipes are of course precious assets and jealously guarded, but summarily these patties are made of:

• Coconut oil – to give the “juicy” look

• Beetroot juice – for the red color

• Heme – for the meat taste

One further detail making these patties absolutely amazing is that while cooking, they develop the Maillard reaction and caramelization of the crust, just like the “real” meat. Doesn’t it sound fantastic?

In the plant-based meat sector, the absolute leaders can undoubtedly be considered Beyond Meat and Impossible Food.

Beyond products have been on the shelves and in restaurants in the USA for some months. They’ve also been in Italy, thanks to Well Done Burger, since last October.

“We believe there is a significant opportunity to expand Beyond Meat well beyond our current retail and restaurant footprint. Our early focus was to establish a presence in the US Food Service and Grocery Retail channels, where we have successfully expanded into almost 30,000 points of distribution. In addition to further growth within the US, we have developed relationships with international partners representing distribution opportunities in over 50 countries. ant new opportunities. We believe increased distribution will lead more consumers to purchase our products and increase the overall size of the plant-based protein category as more consumers shift from animal-based proteins.”

How did the Italians react to Beyond Burger? “In our stores, says Mr. Andrea Mangelli, CEO of Well Done Burger, Beyond proposal aroused so much curiosity both in vegan/vegetarian customers and regular customers who usually eat meat hamburgers in our restaurants.

After tasting Beyond Meat for the first time, most customers get information about the product’s features, recipe, and nutritional value, commending Well Done Burger for bringing such an innovative product to Italy.”

In particular the customers, after the first astonishment for Beyond Meat tasting, get informations about product features, recipe and nutritional value, commending with Welldone to have brought in Italy such innovative product.”

Nick Halla, Senior Vice President of Impossible, has been so nice to give me a quick update on the company’s status “Impossible has seen explosive growth in the United States, Hong Kong, and Macau with approximately 5,000 outlets now serving; this is up from 50 outlets just over a year ago. The demand has been so strong that we will be launching the Impossible Burger in US retail next year along with expanding into Singapore to continue our rollout in Asia. While we don’t have any announcements specifically for Italy, we are excited to expand Impossible globally quickly.”

The plant based patties do not need regulation as they are just products of “recipes” for natural and already known ingredients. They aren’t subjected to any FDA restriction and are not included in the EU regulation for novel food – they are sold freely.

Switching to cultured meat, the matter is completely different.

KNIFE AND HOOK? NO MICROSCOPE AND PETRI

The cultured meat is meat grown in vitro, cultivating real animal cells with a process similar to the tissue regeneration — a job for biomedical geeks rather than food scientists.

From a regulatory point of view, we are talking about brand new food, subject to an approval process by the authorities, so it would take a lot of time before we start having our barbeque with cultured pork chops, lab-grown steak or in vitro chicken breast…or maybe not?

Memphis Meat can be considered the pioneer of such technology, as they started the R&D in 2011 and plan the commercial release for 2021.

America works hard, obviously, but in Europe, we don’t sit back. Giuseppe Scionti, an Italian biomedical engineer and founder of Novameat, developed an innovative cultured meat, 3D printable. The Dutch startup Meatable has just closed a round of 3.5 million to develop its cultured meat project.

Benjamina Bollag and Stephanie Wallis are the founders of Higher Steaks, one startup located in the UK. Benjamina was very helpful by providing me with some information I needed for this article, and she was recently interviewed by Forbes.

Find more at The Food Cons