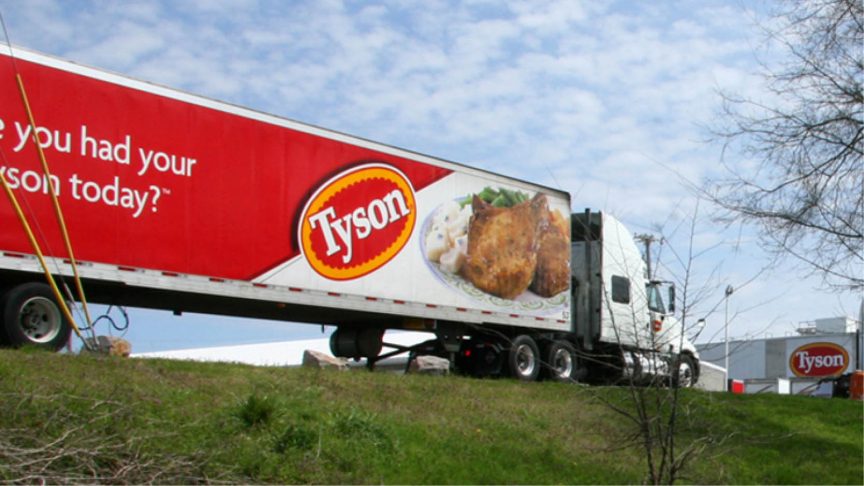 On Tyson’s first-quarter earnings call, Tyson CEO Noel White announced that Tyson will be launching its own animal-free protein products before the end of the year. Yes, the largest meat producer in the United States—and second largest in the world—is developing “great tasting protein alternatives that are more accessible for everyone.”

Tyson will announce more details in the coming weeks. White said after the call, “What I was signaling today is that it is coming. And we will do it in a significant way.”

Among industry incumbents, Tyson has been a vanguard in embracing opportunities in the exploding plant-based market sector. (U.S. retail sales of plant-based meats grew 23% last year.) Their venture capital arm, Tyson Ventures, has invested in Beyond Meat twice and in cell-based meat companies Memphis Meats and Future Meat Technologies.

Now, Tyson is diving headfirst into the burgeoning slaughter-free meat market with its own line of proteins-sans-animal.

Through their branding, distribution, and infrastructure, the industry leaders for conventional animal products have huge potential to accelerate the consumer shift to more sustainable food choices.

As more and more titans of the meat industry pursue opportunities in the rapidly growing market for plant-based products, some plant-based consumers inevitably voice concerns about the blurring of the lines between these market sectors. But the momentum behind plant-based meat innovation is not about providing more vegan options to vegans. It’s about reaching flexitarians.

That’s what is moving the needle for the market and for our food system. The involvement of industry incumbents is crucial for meeting and building market demand.

Consider that every time Ben and Jerry’s launches a new dairy-free ice cream flavor, the brand’s star power and expansive reach are harnessed in service of a better choice. It’s an obvious win. (And never seems to be controversial.)

In parallel, it is better to have Tyson—which sells more meat to more Americans than any other company—leverage its resources to drive rather than resist the momentum of plant-based and cell-based innovation. Tyson’s announcement means that:

Industry incumbents can fight change or lead innovation. Tyson’s got the right idea. We’re excited to see others follow suit.

May 7, 2019 Update: Tyson plans to begin market testing their plant-based protein this summer and then ramp up “on a much larger scale” this fall, per Tyson CEO and president Noel White during Tyson’s second-quarter earnings call.
Until recently, Tyson held a 6.5 percent stake in Beyond Meat. They sold their stake in advance of Beyond Meat’s IPO, reportedly not wanting to be both an investor and a competitor.